Today’s guest post is from community member Christina Cline Schneider. Christina shares another wonderful family adventure. adventure. As always, thank you for sharing, Christina! You have such great insights!

As a mother, I’ve always found it extremely valuable that my children get out into the world and have experiences. Each experience is eye opening and a teachable moment for me. We learn so much from our experiences and the value of adventure bringing about a sense of fulfillment.

With this philosophy in mind,  I try to plan something special for the kids during the year. Sort of like a “vacation” but I’m not a big “vacation” person. I’d rather create some small budget friendly adventures instead. These adventures can range from a Saturday afternoon trip to the library to a full blown “let’s get in the car and drive to a new landmark we’ve never been to.” It always depends on how much extra money we have because let’s be honest, we are ALL on a budget. END_OF_DOCUMENT_TOKEN_TO_BE_REPLACED

I Made A Costume!

Another Dragon Con has come and gone. This year’s guests were incredible. Cary Elwes is as dashing as you’d expect. Ralph Macchio still doesn’t look a day over 16. C. Thomas Howell and Karl Urban had me rolling with laughter. Peter Weller brought the highbrow. And the Hobbit panel with Adam Brown, Jed Brophy, Billy Boyd and Craig Parker was simply phenomenal.

This year the fam decided to join in the cosplay fun, but with our own little twist – we brought a toga party to the con. We decided to represent different pop-culture/sci-fi/literary genres while donning a bed sheet in a crowd that probably topped out at over 60,000 during the Labor Day weekend. 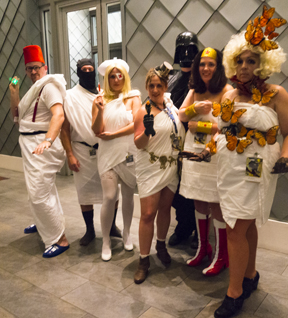 From left to right The Toga Revolution: Doctor Who, A Ninja (but you probably can’t see him), Elle Driver from Kill Bill, A Steampunk Lass, Darth Vader, Wonder Woman, and Effie Trinket from the Hunger Games.

END_OF_DOCUMENT_TOKEN_TO_BE_REPLACED

Why Comic/Pop-Culture Cons Are A Good Thing

This week is Dragon Con! Why does this type of convention make me so happy, you ask? Because it brings everything I’m interested in into one place. The people are incredibly kind, and it’s one of the most visually stimulating experiences from an artistic point of view (namely the costumes) I get all year.

Growing up a theme-park-obsessed kid with a pension for all things fun and fantasy, immersing myself into a character is really not that far from immersing myself in worlds like Hanna-Barbera Land, Oktoberfest or Yankee Harbor back in the day. A convention like Dragon Con brings that side of me to the forefront all over again.  Movies that made me smile, books that engaged me, characters that meant something and themes that keep me going are all represented there. So no matter how much I’m dragging, or stressed about everyday things, I have a long weekend once a year guaranteed to set me right and to regain some perspective. Above all, it’s just so damn creative!

I went to art school and I see these amazing original ideas and characters being recreated by their fans and I feel so inspired. It’s also a great way to allow yourself to be silly, or goofy, or someone else for just a few days.  If you aren’t sporting a costume or at least some sort of geek/pop-culture related shirt, you are in the minority.

For instance, my family and I at least try to make a nod to the Geek culture each year. One year we were Clue characters. One year we sported “I’m With The Geek” shirts and tried to get our pictures with as many cool looking characters as we could. We try to at least throw our hats in the creative ring in some small way. END_OF_DOCUMENT_TOKEN_TO_BE_REPLACED

Dragon Con is less than two weeks away! With that, I will be posting and reposting all things related to one of the most amazing weekends of the year until it begins. Today I thought I’d share a throw-back to my first cosplay ever. (for those of you that don’t know, cosplay is short for costume play)

My family owns our inner Geek, so Dragon Con has sort of become a family affair. The first time we decided to pull out all of the stops, it was decided we would cosplay as Austin Powers characters. Here we are: 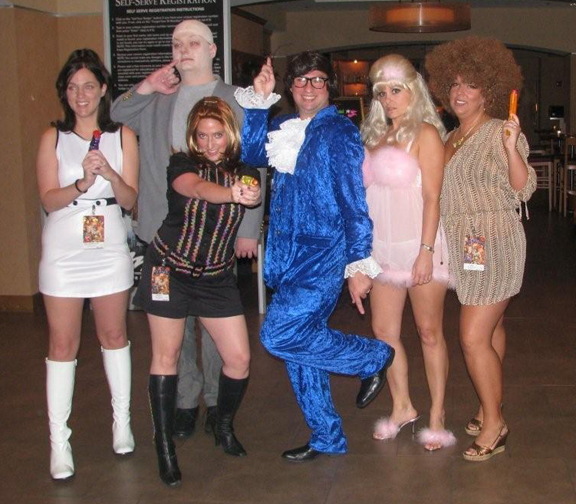 My younger sister was Ms. Kensington. Her Husband was Dr. Evil. My older sister was Felicity Shagwell. My brother was Austin. His wife was a Fembot. And I was Beyoncé as Foxxy Cleopatra (but I think that’s kind of obvious).

As outgoing as I can be, I will say I was pretty reluctant to dress up and parade around in costume. I was nervous. I thought I’d be judged, but as we walked around the Con, we felt like celebrities. People were stopping us everywhere to get a quick pic and throw compliments our way. We got to engage with people we normally would never had a chance to meet. I totally got why people do this all of the time! We even followed in our fellow cosplayers’ footsteps and struck a pose when the cameras were running. Because you totally have to have a pose.

If you have any cosplay pics or great Dragon Con stories, please send them my way! I’d love to share them.