Today’s guest post is from community member Christina Cline Schneider. Christina shares another wonderful family adventure. adventure. As always, thank you for sharing, Christina! You have such great insights!

As a mother, I’ve always found it extremely valuable that my children get out into the world and have experiences. Each experience is eye opening and a teachable moment for me. We learn so much from our experiences and the value of adventure bringing about a sense of fulfillment.

With this philosophy in mind,  I try to plan something special for the kids during the year. Sort of like a “vacation” but I’m not a big “vacation” person. I’d rather create some small budget friendly adventures instead. These adventures can range from a Saturday afternoon trip to the library to a full blown “let’s get in the car and drive to a new landmark we’ve never been to.” It always depends on how much extra money we have because let’s be honest, we are ALL on a budget.

This now brings me to our adventure into the subculture world of Science Fiction. So before you go running back to your teenage pop culture, hear me out: what exactly happens when you give creative freedom to 60K People?

I’ve read about these Sci-Fi people who dress up once a year like Star Trek characters, Aliens, Dragons, Tim Burton creatures, etc. I’ve always kind of felt they were a little strange. I mean, do you really have to dress up in costumes to enjoy your sci-fi, geeky life? Then I started thinking about how they role-play, which just made everything even creepier. After much consideration I decided that research into this sub culture might actually help shed some light on what it’s about. And to do this investigative research I needed to leave my judgment at the door.

Over the summer I began my research project into Dragon*Con. What I found was a sub culture of pretty impressive people. The festival started in 1987 and has grown extensively over the last couple of decades with 2014 roughly bringing in 60K people.  In 1987 the inaugural Dragon*Con took place at the Piedmont Plaza Hotel Atlanta, drew 1400 fans and featured Guests of Honor Michael Moorcock, Lynn Abbey and Robert Asprin, Robert Adams, Ultima creator Richard “Lord British” Garriott, co-creator of Dungeons & Dragons Gary Gygax and Toastmaster Brad Strickland.

Most of the people mentioned above I knew little about. However, what was so shocking was that most of the people participating do not get paid. It’s voluntary. Also impressive was how fast it grew and how much support came from the film industry. So, I continued my research.

By 1989, it drew 2,400 (many to see Guest of Honor Anne McCaffrey), and the event had moved to the Omni Hotel and Convention Center. In 1990, the convention had doubled again, added a Comics Expo, hosted the Origins convention, this time with Guest of Honor Tom Clancy, and expanded to include the Atlanta Sheraton hotel. In 1991 the first “Robot Battles” robotic competition event was added to the list of events, making it the second oldest robotic competition event in the world.

By 1995, when Dragon*Con hosted the North American Science Fiction Convention, attendance had grown to over 14,000 fans, and Dragon*Con was also hosting the International Starfleet Conference. In 2002, Dragon*Con began hosting a parade through downtown Atlanta, which ran from Centennial Olympic Park to the Marriott Marquis, and featured thousands of costumed participants. In 2005, Dragon*Con raised USD $20,000 for the Leukemia and Lymphoma Foundation. At the convention’s 20th anniversary in 2006, there were 22,000 attendees, and the convention continued to grow, drawing 27,000 attendees in 2007, 40,000 in 2010, and 57,000 in 2013.

The explosion of growth blew my mind. There has to be something to this event? I needed to know more, though. How do we attend? What do we do? Will the kids enjoy or barely survive the heat of a Hotlanta weekend?

So, it turns out Dragon Con is a 4-day event comprising approximately 3500 hours of panels, seminars, demonstrations, and workshops, with over 30 specialized programming tracks (forum discussions) Yes! There’s inside stuff going on so we don’t melt. The tracks included writing, alternate history, art, anime, gaming, Science Fiction and Fantasy Literature, comic books, costuming, space, science, online media, independent film, robotics, podcasting, ect. And you don’t have to attend all 4 days. And there’s a parade Saturday morning that is FREE. I also found out that my kids were FREE. Triple awesome!

I bought tickets and on August 29, 2014 I packed the car and we headed for Atlanta.

So what does happen when you give creative freedom to 60K people? WOW!!!

First off, it was a bit of sensory overload for my husband, two children and myself. I’ve been to Disney a handful of times and it’s overwhelming because of the parks and seeing everything but this is a different kind of overwhelming. Every time we turned around there was another character. “There’s Jack from Nightmare before Christmas!” “Omg – I want a picture.” “Greg, Who’s that one?” “Where’s that guy from?” “Dude, who’s that?” “Omg – Seriously, that costume is made of Ego Waffle boxes.” “Kids, Look it’s the Disney’s Brave, Queen Elsa, Anna, and Tinkerbell!” “GREG! – grab your daughter before she attacks them!” “Greg, where are his legs? What a clever costume.” 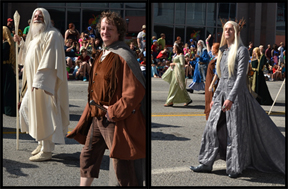 Gandalf and hobbits and elves … oh my! 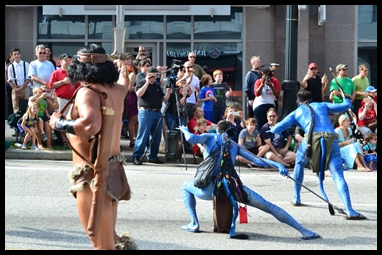 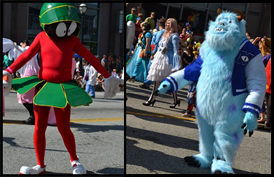 To say the least, we had a good time. Of course, with anything that overwhelming the kids had their ups and downs emotionally, but it was well worth the experience.

Dragon*con is a magical place where people come together in creative expression. A place where you can be anything you want to be, free of judgment or stereotypes. You don’t have to “make the cut” like Idina Menzel or Demi Lovato to be Queen Elsa from Frozen. You can be Queen Elsa because you want to be. Creative Expression in one of the powerful human gifts we have – It enriches lives in meaningful ways.

It was an eye opening adventure – and I’m grateful that my family was able to be a part of it. 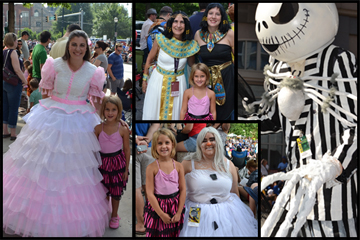 So many kind and creative individuals.

Christina is a palm tree-loving, barefoot, beach bum wife and mother of 2 who is devoted to cultivating a family life where gratitude, self confidence, contribution and love rise above. She seeks alternative parenting methods where she can help to cultivate and guide the spiritual, emotional, and physical needs of her children. In 2013, she resigned from a corporate job in the financial industry to pursue her greater role as a parent and artist.  Since then, she has begun to pursue a career as a parenting and wellness coach.

This entry was posted on Friday, October 17th, 2014 at 1:10 pm and tagged with adventure, Christina Cline, Dragon Con, family, fan conventions, guest post, no take backs, parade, pop-culture, sci-fi, subculture, vacation and posted in No-Take-Backs. You can follow any responses to this entry through the RSS 2.0 feed.
« Total-Take-Back: Potty Training
Arrow- A Show You Should Be Watching »