To be clear, I don’t have kids. This means I haven’t had the exclusive privilege of birthing babies, changing diapers, and sleepless nights. I do, however, have nieces and nephews and try to help where I can. That said, I feel potty training is asking a bit beyond that of the typical accommodating aunt motif. I mean, we do have our limits.

I was at my folks’ house helping my mother with the grandkids. I was about to leave and she asks if I can take the dog out before I go. Sure thing. I grab the leash and as I am attaching it to my mom’s tiny dog, Duchess, we hear, “I need to potty, too.” My niece, who is in the middle of potty training, quietly declared it was her time to go.

I looked at my mom, to the dog, to the kid, and back to my mom. “Which one is more important?”

“That one probably,” my mom said as she nodded toward my niece.

I dropped the leash, grabbed the little girl, and headed to the bathroom. She had this big princessy poofy dress on. 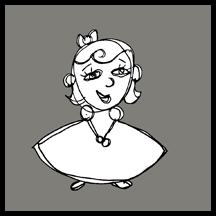 As I struggled to lift it up, I noticed she didn’t need to go potty. She went potty already – like explosively so. I didn’t think an adult could have that much in them. 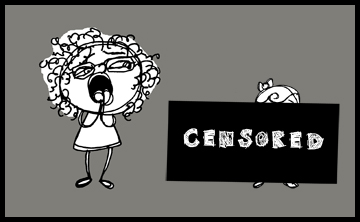 The horror … it was bad. It was really really bad.

Of course as I tried to remove the dirty diaper while fighting the princess dress; I just made a bigger mess of things — literally. Poo was all over her backside and all over the dress. So I had to take it off and let me tell you, that was no cake walk either. The damn dress had buttons! Buttons!? Who fastens kids’ clothes with buttons? Zippers – I get, snaps – no problem, but freaking buttons? And they were these totally miniscule buttons that I could barely grasp while trying to maneuver through their ridiculously tiny holes. Seriously?

Finally, I freed my niece from the confines of the loaded diaper and dirty dress, wiped her from head to toe with twenty baby wipes, then lifted her up to put her onto the stool. That’s when I realized her petite little bum was tinier than the toilet seat – as in she could easily fall right through the hole. 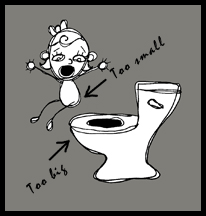 I can do math and this was not adding up.

So as I am holding her above the seat, moving her forward and back seeing where exactly a toddler was supposed to sit on an adult toilet seat, I yelled to my mom, “Where am I supposed to put her? She’s too small! She’ll fall right in!”

Apparently those were not the choice words to use in front of a child in training as my niece began squirming and crying, “No fall in! I don’t want to fall in! Don’t fall in!” Hmmm … that was sort of an issue. Her wriggling was not helping. I promised her she wouldn’t fall in. I told her that her baby brother could fall in, but not her because she was a big girl. The “big girl” thing always seems to work. She finally calmed enough to sit by herself at the front of the stool.

Next, she just looked at me and said she couldn’t go. I told her she just needed to shake it out. “Shake shake shake. Shake shake shake. Shake that booty,” I sang as I shimmied for her. So she began to shimmy, too, on the toilet while repeating, “shake, shake, shake”. This of course began moving her little heinie further back on the seat, wherein she could possibly fall in, so I had to step in and stop her.

I finally deemed the ordeal done. I took her off the toilet and declared she’d done a great job. Of course I totally forgot to wipe her down and have her wash her hands, which my mother informed me is sort of a thing that’s necessary every time. Took me a while to convince her to put new clothes on as well because she longed to wear her poopy princess dress.

I realized I am much more the “give them a fish” than “teach them to fish sort.” Or was this where I led a horse to water but I couldn’t make her drink? Whatever the analogy, it was a complete fail.

This entry was posted on Wednesday, October 15th, 2014 at 4:09 pm and tagged with #totaltakeback, aunt, disaster, kids, niece, no take backs, potty training, toilet and posted in Total-Take-Backs. You can follow any responses to this entry through the RSS 2.0 feed.
« My Movie Moment (guest post)
Another Family Adventure (guest post) »