Happy New Year!!! I hope 2014 treats you well. Though the new year is always a nice clean slate, there was one January 1st I wouldn’t mind forgetting.

My brother, younger sister and I were noshing on typical holiday treats at my folks. Summer sausage was a family favorite and we had enjoyed it just the week before. And maybe it sat out for an hour or two … or a few before being put away. 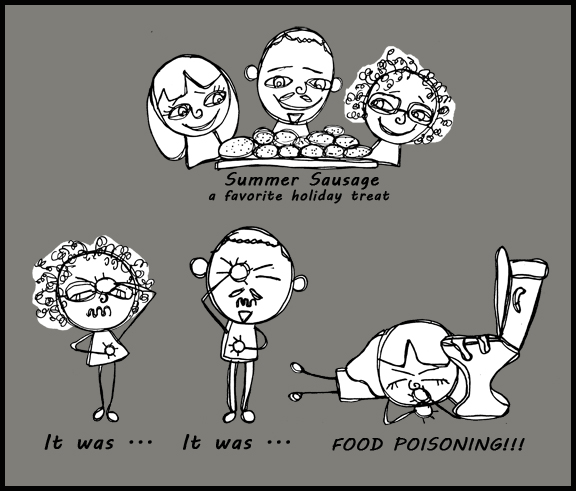 Not A Happy New Year

It started with me. New Year’s Eve. 10 PM. I threw up (I know reading my blog it seems like I do that a lot). I had a fever and the sweats (and every other horrid thing that can shoot out of your body), too. It felt like I had been hit by the plague. We chalked it up to the flu at first. Two hours later, my brother goes down. Same symptoms. We were running in and out of the bathroom like mad men. An hour or two after that, it consumed my little sister who ended up sleeping next to the toilet on the bathroom floor.

We had contracted the WORST case of food poisoning I had ever had. It felt like death. In fact I called my then boyfriend Clifford in Atlanta crying on my bed, clutching my stomach as I bid him a final farewell. I knew I was goner and I was going to leave him my TV.

Miraculously, I did survive, as did we all, but it was hardly the way to kick off a new year.  The worst holiday experience ever!!!