The Mermaids of Weeki Wachee Springs

But let me begin at the beginning. I was in third or fourth grade when The Little Mermaid hit theaters. I remember because my elementary school’s music classes were forced to perform a Disney themed extravaganza as one of our mandatory concerts. My class was assigned the entire Little Mermaid line-up that included “Under The Sea” and “Part of Your World.”

When it was released, the Little Mermaid was the best thing since sliced bread. Disney hadn’t had a blockbuster hit (I mean Oliver & Company? Really?) for quite some  time and suddenly they had their new fair skinned, red-headed princess boasting 80’s bangs and bringing in the mega bucks. What could be better?

I hadn’t thought about mermaids pretty much since my musical debut and the animated movie’s overwhelming success (Ariel tends to be one of those Disney princesses I forget exists), till I saw a documentary about mermaids in Florida. And I am not talking about the two hour special on NatGeo or Discovery or whatever channel that tried to convince you of the physical evidence that proves mermaids exist. I saw a show on the history of a tourist trap outside of Tampa. It was tacky, but it was quaint. And above all, it was nostalgic. So it was right up my alley!

The Weeki Wachee Mermaids at Weeki Wachee Springs Park in Florida are SO worth any detour.  As I pulled into the parking lot there were mermaid sculptures on poles. Gardens in front of the gate. It was a bit chilly and sparse that day in March with winter still rearing its ugly head (yes, even in Florida), and though the park is definitely dated, I could totally envision what it looked like in its heyday. I felt like I should have been pulling into the lot in a 1950’s Continental donning a bouffant, peddle-pushers and a peplum top. 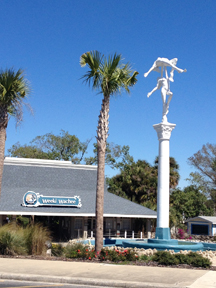