Lib Goes To The Library – Part 5

Here it is – through the course of renewing this book repeatedly, and beyond that of which is apparently allowed (see previous post), I have discovered so much about myself.

I have the attention span of a toddler, the shallow investment of an angsty teen, the procrastination of a college kid, and the evasion tack of one unnamed actor/ former NFL player being cross-examined on the stand.

Did I know these things before now? Maybe … but with this experiment of reading a book thoroughly through, I think it’s been made much clearer to me; I would even venture to say undeniably so. END_OF_DOCUMENT_TOKEN_TO_BE_REPLACED

Lib Goes To The Library – Part 3

Lib Goes To The Library – Part 2

A continuation of  Lib Goes To The Library

I had to renew the book.

Lib Goes To The Library

I’ve been obsessed with television and movies since I could crawl to the dial flipping it back and forth between The Electric Company and The Brady Bunch. I’ve binged watched with the best of them, but it is time for me to expand my horizons.

I’ve decided to read a book. This is huge for me. This is me adulting. For those who know me, and as I mentioned above, I’m a TV and movie kind of gal. I’m visual. I prefer sequentially moving images to that of the printed static word. Every book assigned in school got the sufficiently skimmed treatment to complete whatever essay, test or quiz was assigned. I never actually took the time to read from beginning to end, cover to cover. I even cheated at Choose Your Own Adventure Books. To be clear – I CHEATED at CHOOSE YOUR OWN ADVENTURE BOOKS. My attempts at investing in the written meanderings or machinations of the published variety have been limited to Cosmopolitan, Mad and Highlights magazines over the years.  So, as you can see, I’m not a reader.

That said, there are a select few I’ve read through and through, and in most of those cases I read them more than once.  Unfortunately I could likely count that number of fully read books on two hands.

1.      Harry Potter and The Goblet of Fire – 8 times. Because I was living in Italy and everything else was in Italian.

Now these are just the through and throughs. Not one missed word or page. Other than that, I’ve fake-read MANY books. All skimmed in some way, shape, form or other. Sometimes I just outright skipped to the end or read the book wrapping to gather the general idea before BSing my way to good grades and teacher’s graces. And for the record — straight A’s in all of my English classes since always, so apparently my half-read-general-gist method works. No cliff notes or Google summaries back in the day. Just pure glancing and guessing earned me those A’s.   Books were time wasters in my opinion. I had tennis to do, friends to see and Dawson’s Creek to watch. I’m ok with that.

I renewed my library card last week, because, well, apparently libraries still exist. So I checked out a book. I suppose in these days of Amazon Prime and bookstores every other block I could have purchased the book, but I’m also trying to de-clutter my life. Who needs more dust collectors lying around? Besides, if I really love the book, then maybe I’ll purchase it. Unless this is one of those instances of why buy the cow if I’m getting the milk for free…or is that just a sex and marriage idiom and not applicable to library checkouts? 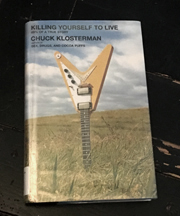 With all the pop-culture and podcasts I’m invested in these days, Chuck Klosterman has come up the lucky winner. Shortly I will be embarking on Killing Yourself To Live. I would have preferred Sex, Drugs, and Cocoa Puffs from what I’ve gathered online, but the library only had it on Audio CD which would negate the whole me reading a book thing in this instance. Beggars, or stubborn people, can’t be choosers so Killing Yourself To Live it is. We’ll see how it goes.