I had to go home a little over a week ago. I don’t know when I’ll stop calling it home. I haven’t lived there for nearly 17 years, but for some reason, I still call it home. Maybe because I don’t feel like Atlanta is my final calling and more like a temporary stopover to wherever my home will one day be (which will never be in rural Northern Indiana, I assure you). I don’t know. The thing is, every time I go “home” to that small little town twenty minutes from Michigan, a tiny part of me wishes I wasn’t there. I like remembering how things were, and things have changed so much over the years. Old haunts and locales I thought I’d never forget are sometimes unrecognizable to me now. But then there are the few things that never change – like idiots driving 54 in a 55 on US6 (I curse each and every one of you. Every. Time.) OR Ruth’s and Joe’s house.

I wasn’t “home” for the happiest of situations.  I was home because Joe had passed away. Ruth and Joe are Chelle’s parents. Those of you who read my blog regularly know Chelle’s my best friend in this world. 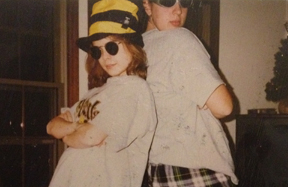 That’s us. Two besties playing it bad ass at Ruth’s and Joe’s. That’s how we rolled. Still do.

Ruth and Joe were like second parents to me. They were ridiculously supportive in my formative years and beyond. They welcomed me and all of Chelle’s friends into their home asking us to make it our own.  And we did.

The house is down a long gravel lane set back from a country road (for those of you not from these parts – everything is off of a country road). The moment I pulled in, this time in my Acadia in lieu of the old high school Ford Taurus Sedan, I still peeled down the drive like I always did leaving a cloud of white dust in my wake. I remember every time he saw me do it, Joe would say, “There’s Lib. Driving like a bat out of hell.” And yet he still trusted his daughter’s life in my hands as we’d take off for our next big adventure to parts unknown. Ok. They were always known; we were teenagers. So maybe to like the Friday night football game?

I stayed at their house for one night while I was up there. Just walking through the front door brought so many memories rushing back . Maybe some of the furniture had changed, but the feelings the house evoked hadn’t changed at all. I was left alone in it for a little bit, locking things up before the viewing that day.  I took the opportunity to wander around, not knowing when I’d be there again, and smiling as certain moments from events past sprang to mind (For the record, Ruth, I was totally not creeping in your house—  just wandering and reminiscing, NOT CREEPING. I promise!).

Apparently some furniture had stayed the same. I found one of the old couches we used at every get-together. I was surprised we hadn’t completely destroyed it all those years ago. 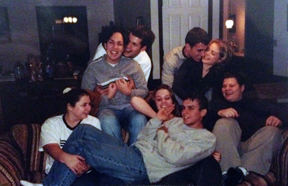 One of many goofy photo ops on Famous Couch 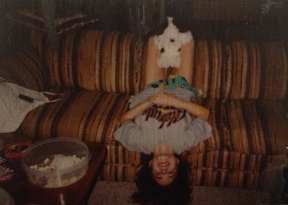 Just another case in point. 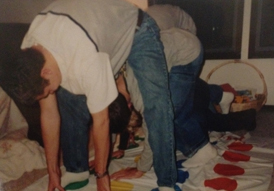 A little Twister here and there.

We had slumber parties. 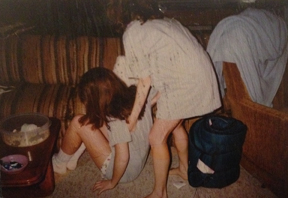 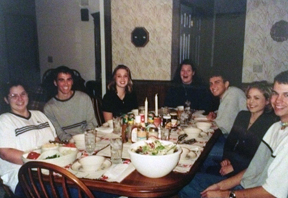 Typical bunch of misfits having dinner at the house.

We did makeup and hair…

After my brief stroll down memory lane (in a not creepy way remember), I had stepped outside to let the dogs do their business (one was Chelle’s and one was Ruth’s and Joe’s) . I was promised neither one would run away. Apparently that rule only applies when squirrels aren’t in the picture as I watched, completely mortified, as Ruth’s and Joe’s little sweetheart tore off for one of the speedy rodents across the property towards the open field.  So there I was, running over the lawn in sharp high heels, screaming at the top of my lungs in 25 degree temps, trying to stop him when suddenly all of the nights we spent playing capture the flag hit me, too. We’d don black clothes and divvy up into two teams. We’d run covert ops through the woods and over the grassy knolls with only the moonlight to guide our way… For those still worried about the dog, Barkley did make it back to the house while I was lost in my mind – crisis averted. Thank God!

I remembered bonfires and swimming parties. I remembered teepeeing those woods more than once  and hauling ass with Darewood down that damn gravel drive (we’d park by the country road so we wouldn’t be seen – it’d always seem like a smart idea before we tossed the tissue in the trees, but it became the dumbest idea ever as we sprinted back like half a mile in the middle of the night as if our lives depended on it).

I remembered Chelle’s engagement celebration. I remembered sitting on the back porch sharing a glass of wine with Ruth and Joe.

As much as things feel a bit foreign when I’m back now, Ruth’s and Joe’s house made me feel like I was home again. That feeling wasn’t because of the house they’d built, but because of the love they provided to anyone and everyone who stepped foot inside. I am so lucky and thankful for the Blackburn clan who unconditionally adopted me into their family so many years ago. I would do anything for those people as I know they’d do anything for me. I can never thank them enough. 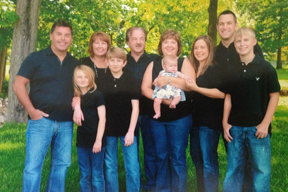 I didn’t mean for this post to get so sappy and sentimental as basically every story I have relating to Ruth’s and Joe’s is actually rather crazy, comical, or fun. I was just a bit surprised that day because though I was brought there under sad circumstances, I found my heart wasn’t filled with sadness at all. It was filled with the purest  joy and love as I wandered around reliving those amazing moments we shared. And that’s the way life should be.