The Art Of The Rolling Stop

I’ve had it mentioned to me on more than one occassion – “That wasn’t a stop.” My response is always the same. “Yes, it was. It was a rolling stop.”

I was born into a life of breezing through two-ways and all-ways and everything in between. Being raised on back country roads lends itself to a slightly wider berth in the interpretation department of vehicular rules and regulations than it does for the average urban Joe.

Here’s the thing, a true rolling stop takes finesse. Some may call it sloppy driving or poor judgement , but I call it art. A real rolling stop is a form that should be celebrated for the Venus de Milo that it is.  It’s not a pause, or a brief moment of looking all ways. It is a stop. If you believe it, the cops will believe it, too.

3AM on a dark island road somewhere in Savannah.  I rolled.  Immediately after the turn, the blue lights glowed in the rearview.  I pulled over, knowing full well why I was being pulled over, and admitting so the moment the window went down. The police officer and I had a wonderful chat. I explained the virtues of a rolling stop for a young 20 something female driving home at 3 in the morning on a dark island road in a dangerous city all by her lonesome.  Sold. There was no ticket given, no warning either. I think I may have even received an apology for him possibly scaring me at such an hour in such a desolate area.  In hindsight, that was the only nice cop I ever met during my time in Savannah. Maybe I’ll share my other cop encounters next week.

Anyway, no matter the approach, the key  is to have plausible deniability. Either you witness the indicator brush the top of the 0 mph ever so slightly before moving forward, OR convince yourself the speedometer is broken, OR go the organic route by closing your eyes and feeling the stop in your bones. Though don’t keep your eyes closed. Do like a long blink. Seriously, don’t drive with your eyes closed. Any of these techniques can work, but you have to practice. The best method is to possibly combine all three at a given time. It’s a delicate balance and it’s not for the faint of heart.  I feel very confident in my ability to pull it off, but  few could truly perfect it as I have, but then I also feel 96% of the population that have been granted a license should have it revoked.

Leave a comment   |  tags: being pulled over, driving, no take backs, rolling stop, rules of the road, stop signs, stopping | posted in No-Take-Backs

I’m not sure if I really consider this a take-back. More like a probably-shouldn’t-have-done-it kind of moment? It was Christmas break and I was visiting a friend in Boston. I’d flown out for the New Year and then he and I were going to drive from Boston to Chicago and then back down to Savannah for the new semester of school.

Anyone who knows me knows I am all about road trips. I will drive pretty much anywhere given the choice. I don’t mind flying, it’s a control thing. I like having control. That combined with security lines, airport hassles, delays, tarmac waiting, and crying babies in an oxygen deprived confined space makes driving my preferred method of travel, if time allows.

So there we were, Frankie and I, driving cross-country from the North East Coast to the Midwest in the dead of winter. The plan was to take turns driving. Not a problem for yours truly, used to trekking long distances via four door sedans. Although I can’t remember if Frankie’s car was a four door sedan. It was a Kia. Like a 2000 Kia. Did they make four door Kia’s back then? Oh, and it was the size of a matchbox. Regardless it was Frankie’s precious vehicle and likely most prized possession next to his Macintosh computer.

We’d taken off in the evening, planning to drive overnight and miss most of the daytime traffic. It was my turn once we hit New York State. Somewhere near Buffalo, a solid 300 miles of me behind the wheel, is when I realized the parking brake was on. Frankie was fast asleep on the passenger’s side. It was like 2 in the morning. So I did what any person realizing they’re driving with the parking brake on at speeds upwards of 80mph does – I nonchalantly released it. And totally swore to NEVER do it again.  And I didn’t. Till after the rest stop in Pennsylvania… oops.

In my defense, who uses a parking brake to actually park? Especially on a solid flat surface? I never told him what I did. Not really sure he had any parking brake left after I had at it. Probably should have told him …The lesson should be don’t let me drive your car, but really I think we all know it’s never to use your parking brake unless you’re in San Francisco.

Throw-Back-Monday: Yes, I Drove Through The Ocean. (guest post)

This is a great post submitted by Ms. Politico. Thank you for sharing!

Tybee Island is a beautiful little island  about 20 minutes from Savannah Georgia. My family would visit Tybee fairly often throughout my high school  years to see family, and it is still one of my favorite places to visit today.

If you’ve ever been to Tybee, you know there is one road that takes you out to the island from Savannah. For a large part of that drive, it’s just a two lane highway.  It’s a fun little trip as you’re surrounded by marsh and ocean on both sides as you make your way out to the island. If you’re a nature lover, it’s definitely a scene you can appreciate.

One time  while my family was staying at a beach house out on Tybee,  my sister and I had to run some errands and get some supplies. There  weren’t a lot of shopping options on Tybee at the time, so we headed to the nearest Wal-Mart on a nearby island. However, we left during a fairly substantial rainstorm. I don’t think either of us thought anything of it, at least not at first.

After leaving the beach house, we made a couple of turns and were again on the main road that would take us back toward the city. Little did we know that not only would we be driving with the rainstorm, in the dark, but also during high tide. That wouldn’t normally seem like too big of a deal, except the road to Tybee Island was actually quite low in some areas…as in when it was high tide, the water would be just a little bit below the level of the road ( or so it seemed). The result was the scariest ride of my life.

My sister was driving and I was the passenger. We were making our way slowly down the main road, but the rain was coming down extremely hard. Suddenly, I heard my sister exclaim, ” I can’t see anything! I can’t even see the road!”. Not exactly what you want to hear as a passenger. I was looking out the windows of the car, basically just trying to find the edge so I could help direct her to at least stay on the road. Unfortunately, I didn’t see road. I literally just saw water.

This is when my heart began to beat a little faster. I couldn’t believe it. There was seriously NO ROAD! Did I mention that my sister drove a small, extremely lightweight vehicle that could easily have been washed away? I was, to say the least, nervous.  After a little while of driving in horrible conditions, we came upon a clearing, where you could just make out the ocean in the moonlight that had crept in, except the ocean didn’t stop at the road, it overran the road! We were actually driving IN the ocean! 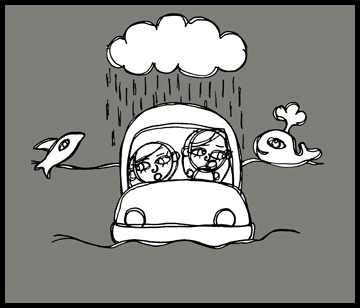 Driving through ocean. Ain’t no thang.

At any moment, it seemed like we would just float out to sea. My mind start going a mile a minute. My survival skills were kicking into gear. If we do get washed away, at what point do we try to open the car doors? We wait until the car fills with water then do it, right? Or is it better to just jump out of the car? Somehow, while I was planning our escape, my sister managed to navigate the road, or lack thereof, and get us to higher ground.

I couldn’t believe it! We made it! I still don’t know how she did it, but props to my sister for keeping us alive.  Needless to say, we made it to our destination, the rain died down, and it was a MUCH better trip on the way back to the beach house.

It was bizarre, scary, and one of the coolest experiences at the same time. I mean, who else can say they’ve driven in the ocean?