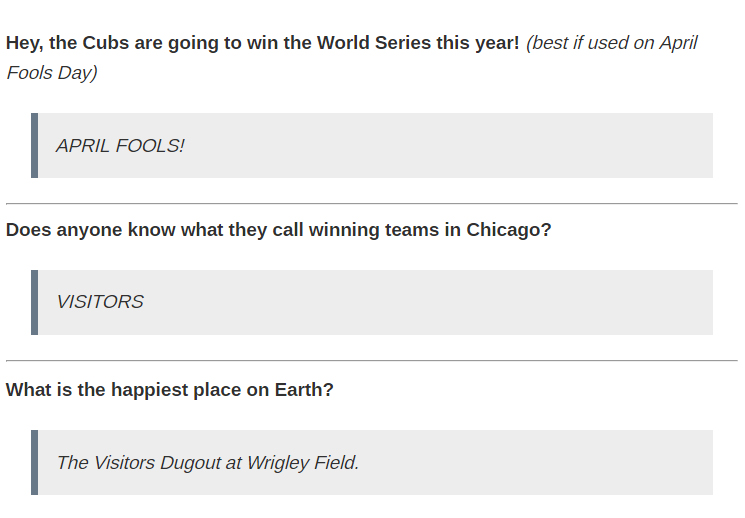 Being a fan means something. It gives you purpose. It fills a hole in your heart that you can’t explain. It offers an outlet for your passions to be released. Being a part of a fandom? Well, that can make you feel right at home. A fandom is like a family. There will be different levels of involvement. Some only show up for the main events, while others show up at everything. Some will irritate you and some will become closer than you could ever imagine. Some are sane, but there’s always those nutters like your old Aunt Alma who’ve cornered the market on crazy. Regardless, through thick and thin, if you’re a fan, you are not alone.

I, myself, have been a fan of many things through the years. Being a fan of anything can be as exhilarating and joyous as it can be frustrating, tiresome, and depressing (any Cubs fan will confirm this is true). Being a fan is also an investment. Whether it’s time or finances being sacrificed for the love of the game, television show, fictional character, political ideal, etc., one’s energy is being spent in the form of unadulterated devotion. This is meaningful. THIS is a big deal. However, after watching my Twitter timeline implode like Donald Trump during this week’s debate, I question what being a fan is really all about.

There are those that go with the flow, and then there are those that go bat-shit-crazy too far. i.e. The Steve Bartman Incident. The abuse he endured was unacceptable. Sure, I wanted to ring his neck like the rest of them, but that feeling eventually went away… after a few years (no really, I’m not bitter).

So here’s the issue – no matter how die-hard you adore whatever it is you adore, there are boundaries, but where is that line? Social media has allowed us to band together more easily. No more waiting for tailgates or water cooler moments with our nearest and dearest to share our excitement. Just last night I was following the Cubs versus Dodgers NCLS Game 5 on my Twitter feed and though I couldn’t be at the game, the interactions online made me feel like I was still a part of things. I could share similar sentiments with fans 3000 miles away, and when the Cubs clinched the win, I was jumping up in down along with every other Cubbies lover there is. It was glorious.

However, social media is a fickle thing and a double edged sword. Though it’s expanded our connections beyond our backyard, it’s also taken those (sometimes quite volatile and inappropriate) conversations, once limited to your best friends or close colleagues, and allowed those thoughts to be plastered across the web for anyone to see.

I’m all for being honest, but there is such a thing as being polite. There’s decorum. There’s a general respect we should have for one another that seemingly disintegrates online. My timeline was imploding over rumors about a storyline that may or may not happen on my current favorite show (Arrow). Did Ithe rumors excite me? No. Is that how I want my favorite story to be told? No. However, I am a fan, so I won’t just give up on it. At the end of the day, that show has endeared itself to me and has me wanting the best for it and those that make it happen. That said, I’ve witnessed “fans” taking to their keyboards demanding resignations from the writers, calling for boycotts of the show, threatening the producers, applauding lower ratings and essentially giving the fandom a bad name. Remember how I said fandom is like family? Well these “fans” are like the red-headed step children in revolt. One of my biggest pet peeves is a vocal minority presumptively speaking for the whole.

Those “fans” aren’t fans in my eyes. I wouldn’t consider them pink hats, either. Take it from someone who’s team hasn’t won a World Series in 108 years … patience is a virtue. Sometimes you just have to have faith. It can’t always be pennant wins and rainbows. Sometimes it’s sucking it up for the love of the game and holding out hope that the best is yet to come. Did I want to cry in a corner when Joey was with Dawson instead of Pacey? YES. Was I disappointed Mad Men never killed Betty? YES. Do I want to pull my hair out every time Michigan loses to Ohio State? YES. But such is fan life, right? It’s not taking the smack talk I shared with my bestie over beers and publicly ridiculing those that I claim to love with it. Some conversations should be kept behind closed doors. You’re in it for the long haul or you’re not. That’s what being a real fan should be. Just because there’s a platform which allows easy engagement, doesn’t mean you should always engage. Sure, knee-jerk reactions come with the territory, but hurling insults at your favorites and decreeing “being done” isn’t. Don’t kill the fandom vibe by being the drunk idiot uncle everyone hates. Walk away. It’s ok, though I can’t say you’ll be missed.