Can you read the words on the shirt? 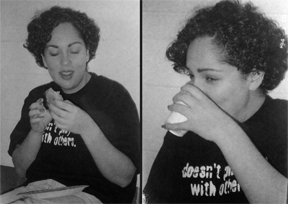 “Doesn’t play well with others.”

There might be way more truth in that statement than I ever care to admit. And there might have been some catering to a kitschy 90s trend by literally wearing pithy inner thoughts on my chest for the world to see. Either way, a true statement is a true statement.

The not playing well with others can be attributed to many things, but there is one personal attribute that supports that statement more than any other: I am competitive. Like uber competitive.

Yes, I was an athletic competitor in my younger years, but that’s not what I’m talking about here. I’m competitive in life. All of it.

I’ve mentioned before how I always try to beat my time. If I made it from the burbs of Atlanta to New Paris, Indiana in 10 hours and 52 minutes one time, I’m doing my damndest to be there in at least 10 hours and 51 minutes the next. Shorter gas stops. Fewer bathroom breaks. Whatever it takes to beat my time. If it takes me 34 minutes to get to IKEA, next time it better be 33 (or less). And so on and so forth. I do this. All. The. Time.

I compete with roadways, not just Father Time. For instance, hugging curves on a highway or even a back country road. The suggested speed limit of taking the sharp curve might be 25 mph. I try to take it at 30. Or 35. (*whispers* or 45) Because I’m a rebel like that and driven to win. (Driven to win…couldn’t help myself. Heh heh.) Bottom line, I push it to win it. What exactly I’m winning at …??? Let’s just call it Life In General for now and move on, shall we?

I race with others as well, not just myself. What kind of competition would life be if it didn’t involve other people?  I sit at a red light ready to gun it the moment the light turns green just to beat whoever pulled up beside me. The entire thing is very Better Off Dead.

Though in my experience, unlike in Better Off Dead,  the contender is usually wholeheartedly unaware of the impending race.  I always stare to clue them in, but they never seem to notice. The point is, the moment that light flashes from red to green I’m off like a prom dress and the other guy eats my dust. Sometimes I even commentate on the race in my head. What? I come from the land of the Indy 500 and live in the heart of NASCAR country. Something was bound to rub off, right?

It doesn’t end at red lights. I pick out a person eyeing the shortest supermarket line. Doesn’t matter how old they are, I race them too. And I feel like this every time.

Suck it old lady with a fuller cart.

I brush my teeth faster than Clifford.

I race my dogs up the steps of my house.

I make sure my handwriting is prettier than the next person’s.

I do more reps each time I’m at the gym, even if it’s just one more.

And herein is where I realized that my competitive nature has possibly, maybe gotten a little out of hand …

I was at the pool at the gym. The lady in the lane next to me had her goggles and cap on ready to go. Needless to say, eyeing her form, she was definitely a competitive swimmer at some point in her life. Judging by her sharp strokes, she was probably a very good one.

She starts her leisurely laps and within minutes I find my laps somewhat synching with hers. We begin taking off at the same time for the opposite end. I find myself steadily increasing my speed. My form was definitely not as perfect as hers, but the need to beat her to the imagined finish line began to propel me forward rather than the motivation to get fit.

This is exactly how I saw it going.

I quickly went from my standard swimming workout routine to thrashing and kicking wildly while doing anything and everything I could to be faster than her. To be better. To win.

By this point, every intake of breath felt like daggers painfully and methodically stabbing my lungs, but still I was compelled to beat her. I had to get to the other end first. This compulsion to be the victor in a make-believe race consumed me over the course of several laps wherein her experience finally outweighed my determination. I had become an exhausted  drowned rat barely able breathe.

This is how it actually went.

Maybe I should have been a little embarrassed by my attitude. Maybe this is where I should have a realized my competitive nature had gone a little too far… but I didn’t.

The moment of realization wasn’t at the pool. It hit me in the sauna a week or so later. I walk in and see two ladies. One was sitting and one was laying down with a towel over her eyes. I took my seat in the corner, prepared to rest and relax after a nice workout.

I love saunas. They are the best thing about tanning beds without the cancer. I’m cold a lot, so the sauna is the warmest of hugs after a long hard day. The suggested limit to be in there is around 20 minutes. Sort of like the speed limit is a suggested 55.

I hadn’t been in there more than five when the lady that had been sitting upright got up to leave. A few stragglers came and went. Sitting for just a few minutes then heading out to carry on with their day.

I sat back for the long haul. I noticed the other lady was still lying down. The towel was still over her eyes. I could tell she was breathing, but I was surprised she was still in there. I was definitely approaching the 15 minute mark and she had clearly been there a few minutes before me.

In my mind, I decided I couldn’t possibly leave before her. And so another race was underway. I was going to stay in the sauna longer than this lady. She was there before me, yes, so there was no Earthly way I was leaving before her. A battle of wills had begun.

So I waited. And I waited. We were definitely at the 20 minute mark…. then we hit the 25 minute mark…she just laid there, motionless except for her breathing. Didn’t matter. I was going to win.

As the relaxation phase of the sauna slowly began to fade, replaced by that uncomfortable too-much-sweat-too-much-heat-utter-inability-to-breathe phase, I shamelessly remained. I was going to out-sauna this woman. I would take the stifling dry roast longer. I would sweat harder. I would be unmoved until I claimed victory over this tiny enclosed box of cedar that was beginning to create a bit of claustrophobia in my mind.

30 minutes … she was clearly playing hard ball. I was struggling to breathe. And the room was steadily closing in on me. No matter. I closed my eyes, trying to feel a nonexistent breeze on my face. My mouth was as dry as the Sahara.

Somewhere between 35 and 40 minutes, I began to smell defeat. It was in the air. Along with the sordid stench of bad B.O. I hit my breaking point. There was to be no victory that day.

I practically crawled on my hands and knees to the door.

It was maybe a bit much …

Pushing it open with the little strength I had left. The cool rush of air conditioning hit me hard. I was gasping for every gulp of air I could get. My entire body was tomato red. And my ego was sadly deflated.

Who was this woman? Never in my wildest dreams did I think she had it in her. As I stumbled to my locker, side-eyeing my pathetic sticky dehydrated reflection in the mirror, yeah, that’s when I realized I’d perhaps taken my competitive ways a bit too far.

Nah. Competition is just too much fun.

This entry was posted on Friday, April 17th, 2015 at 7:30 pm and tagged with Better Off Dead, competition, competitive drive, no take backs, racing, sauna, swimming and posted in No-Take-Backs. You can follow any responses to this entry through the RSS 2.0 feed.
« Throw-Back-Monday: Going Home
Throw-Back-Monday: Prom »