I almost burned down the house thanks to Fantasy Football. Seriously, though. It happened on Monday. I had heated some oil on the stove to cook some frozen French fries for Clifford’s dinner. It was fast and easy and if you haven’t been paying attention, I’m not exactly Julia Childs here, so whatever.

When the oil was hot enough, I threw in the fries. I put the lid on and walked into the living room to grab my phone. Little Sis called right when I went to pick it up. We got whatever pleasantries needed out of the way and then we got down to business -Fantasy Football.

Our draft is Sunday, you see. We have 14 in our league this year which means we’re going to need to go deep. And as far as players go, they’re already dropping like flies. We started going through possibilities and strategies, the pros and cons of various players, our always in-sync thoughts on Tom Brady, team names, etc. You get the drill. The next thing I know I see smoke billowing out of the kitchen in a dark dense wave. I pause, staring at the smoke. I’ve never seen that much in an enclosed area in my life.

Me: There’s smoke coming out of the kitchen. Just a sec.

I got up from the couch and walked into the kitchen to see it filled to the brim with smoke, and now I could smell it, too. The repugnant odor of burnt oil choked the breath right out of me. This was well beyond toasted marshmallow territory. This was bad.

Me: Hey, I think something’s on fire. I need to go.

I hung up and realized that though I could barely see, holy shit, I had had something on the stove! Consumed by football once again, I’d completely forgotten that I was even making anything at all. I ran to the stove and turned it off, watching as the dark grease-filled smoke ballooned from the small blackened pot, filling the open area with its oppressive stench, devouring any oxygen it could find left in the room.

I turned on the vent and opened the window trying to get the smoke to dissipate as much as it could. The entire time this was happening, Clifford was downstairs renovating the garage. I was thinking two things—-

1. I am so thankful we live like college kids as our detectors have no batteries (because that noise would have been annoying as hell and would have certainly alerted Clifford to what was happening upstairs).

2. He was absolutely going to kill me, and then proceed to lecture me about being oblivious to my surroundings.

The funny thing is, is that with all the smoke seeping through every vent in the house wherein he had to have smelled something was amiss, he never once made his way to my level. So maybe I’d get away with this little snafu after all …

About an hour later, Clifford finally emerged from the garage and it was time to play Deflect and Deny.

Clifford: What burned? It smells like something was on fire.

Me: (taking a whiff of the foul air while trying not to gag) I don’t smell anything.

Clifford: (skeptically) You don’t smell that? (he paused and then looked at me with one brow raised) Did you set fire to something?

Clifford: (not buying what I was selling) Seriously. What burned? There’s smoke everywhere in the house.

Me: (innocently looking around, smoke burning my eyes) I don’t see anything. (I saw it everywhere)

Clifford: (pursing his lips) You don’t see the smoke?

Clifford made his way to the kitchen.

Clifford: No really. What did you burn? You did something. (he starts coughing because of the heavy smoke stagnantly suspended above)

Me: (casually continuing to sit cross-legged on the couch while watching Turn Season 2 and enjoying a bowl of ice cream to soothe my sore smoky throat, I quickly glanced his way from my periphery) I didn’t do anything. Why do you always think I did something?

Clifford: (walking out of the kitchen and giving me the look) Libby …what did you do?

Me: (pausing Netflix, sighing heavily and rolling my eyes) I may have tried to make some French fries for you and I may have left them on a little too long …

Clifford: Because you forgot about them? (he glimpsed the laptop on the coffee table before me)Because you were on your precious computer twitting or posting shit instead of paying attention?

Me: (confidently) I was NOT on the computer. (because I wasn’t)

Clifford: So you were on your phone then. (much more of an accusatory statement than a question)

Now this is where it gets a bit murky, I know. For some reason when Clifford challenges my life choices, the instinct I have as my hackles rise is to unequivocally prove him wrong. There’s just something about him that turns me into a rebellious 16 year old (or a petulant pre-teen, take your pick) when his criticism kicks in. Now if we were being all technical about words and their meanings, I guess to some that means I lie. However, I choose to think of it as diverting Clifford’s attention to lesser offensive possibilities that could have happened just as easily. Also, he would have been super pissed to know I almost burned down the house because of Fantasy Football.  He already thinks I’m a little too involved…

Me: (maintaining eye contact) I was not on my phone.

Clifford: (huffing) So where were you? The bathroom?

Clifford: (taking a deep and totally judgmental breath) So let me get this straight. You light a gas stove with oil on it and then go to the opposite side of the house to go to the bathroom?

Me: (still maintaining eye contact) No, I used the closer bathroom.

Clifford: (sighing and rolling his eyes) But it doesn’t matter. You left a pot of oil burning unattended. Do you know how dangerous that is?

Me: (rebellious teen in full force complete with eye roll, indignant groan, and broken eye contact as I reached for my phone to tweet) Yes. (not looking up) And it won’t happen again.

Clifford: (sharply) You better not be twitting this.

Me: (snorting) It’s “tweeting” not “twitting” and I totally am.

Clifford: (letting out a frustrated grizzly bear like growl) You drive me nuts! You almost burned down the house!

Me: (simply, still tweeting) But I didn’t.

Clifford: (forcibly trying to make a point that just wasn’t going to take) But you could have.

Me: (quickly looking his way) But I didn’t! And I won’t do it again.

The expression on his face was the standard expression I receive from Clifford when I promise to never again do something he deems completely stupid. Aggravation mixed with pure incredulity. It rolled off my back along with every other look like that he’s given me over the years; I just kept tweeting.

So, Fantasy Football almost burned down my house. It’s four days later and it still smells like 85 bags of burnt popcorn. It’s SO bad.

Anyway, I can’t wait for the draft! Though my Rendevous Reaganites came in second place last year, this year’s team, Stop! Hamiltime, is going for the gold. I can feel it. 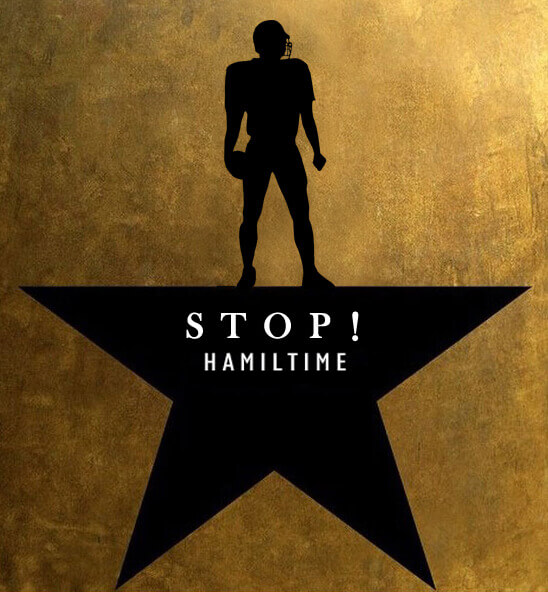 This entry was posted on Friday, September 2nd, 2016 at 6:52 pm and tagged with burning down my house, burning food, burning oil, fantasy football, football, getting distracted, house on fire, i shouldn't cook, lying to clifford, no take backs, smoke, Stop! Hamiltime and posted in No-Take-Backs. You can follow any responses to this entry through the RSS 2.0 feed.
« WANTED: Podcast Recommendations
A Conversation With Clifford III »