We had the sweetest little Chinese Pug growing up named Taffy (no, I didn’t name her). 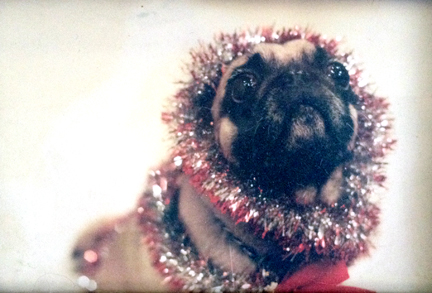 Taffy. The sweetest dog in all the land.

My sister and I had taken her on a walk to the river preserve not far from our house. We lived in a very rural area. As we were heading home, we were walking by a house when out of NOWHERE came the most vicious dog I think either my sister or I had ever seen.

The dog was snarling and glaring with his yellow eyes (so help me God! YELLOW EYES!) and racing straight for our sweet little girl. Taffy was frozen. She was completely terrified. I guess you could say her flight or fight instincts kicked in but it was something more akin to the oft-unspoken third option: forfeit. She collapsed to the ground, rolled on her side and started peeing like a race horse. She was peeing on herself, she was shooting it across the road; she couldn’t stop! I never thought such a small dog could have so much in her. I suppose that was her version of a white flag. 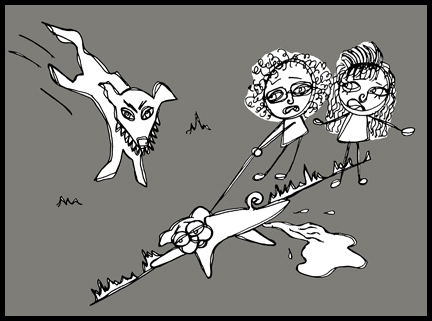 As the ferocious beast was still rushing our way, my sister and I heard a voice calling from behind the house, “ Buttercup! Buttercup, come back!”

Are you kidding me?!!! ARE YOU KIDDING ME?!! That’s like calling Al Capone “Little Angel” as he mows you down with his Tommy Gun.

And here’s the thing – Taffy isn’t moving. As much as we tried to get her back on her feet, it wasn’t happening. We couldn’t physically pick her up, either, because she was spazzing so much. So Taffy just continued to spray her cowardice everywhere.

Then suddenly, with impending doom just feet away, we hear it. CRACK! The chain has hit its limit and stops the savage Buttercup right in her tracks. We were saved!

Taking our lovable little pug on a journey to Hell and back is something I regret terribly. I think she aged 15 years in those 30 seconds that felt like forever. But she did survive, we lived to tell the tale and are eternally wary of dogs with violent names like Buttercup.

This entry was posted on Friday, January 17th, 2014 at 1:44 pm and tagged with Chinese Pug, dog walking, no take backs, total take back and posted in Total-Take-Backs. You can follow any responses to this entry through the RSS 2.0 feed.
« My Dog Locked Me In My Basement
Throw-Back-Monday: My Friends, Chicago And Man vs Food »

3 Responses to “Total-Take-Back: Walking My Dog”