It was the summer of 1995. My friend Justin Bennett and I found ourselves pretty bored, as one does at the age of 15 when he can’t drive and the world isn’t exactly his oyster. In a sleepy small town like we lived in, boredom was inevitable even if you had a license and the world was many oysters all for you. Anyway, we needed something to do. We decided to make the mile and a half trek across town to rent a movie.

We entered the Red D Mart (yep, our Red D Mart gas station rented movies at one time). We deliberated quite a bit, hemming and hawing over what seemed like humdrum choices. Nothing really screamed “RENT ME.” After reading the backs of half of the boxes, we finally found one that didn’t look too bad. It was a romantic comedy. We could do that. There was supposed to be a love triangle. A total trope, but we could do that, too.

We paid for the rental and walked back to my house. We entered the living room and powered up the VCR. I remember my mom sitting in her chair clipping coupons.  She smiled at us asking if we’d found something fun to watch. We grunted and nodded absently. I remember my brother was there, too. He must have been home from college killing time or something. He decided to watch the movie, too.

Justin popped the VHS in the player and we began the film.

The movie was rated R, but the Red D Mart wasn’t exactly id’ing anyone for a dollar rental back in the day. As the story began, I realized little by little that this movie was different. Sort of early 90’s progressive different… Now people who know me may think know I have a dirty mind and sense of humor. Though that may be true, there was a time on this Earth where I was pretty naïve. This was one of those times.

Justin and I watched with my mother and brother as three college students were randomly thrown together to become roommates forced to share a suite in their university dorm. One would think with the stereotypical Hollywood mix of three vastly different personalities interacting and clashing, hijinks were bound to ensue. As the tagline to the movie went: One girl. Two guys. Three possibilities. So maybe not When Harry Met Sally material, but surely a fun filled comedic romp that would make us laugh and forget ourselves for the better part of 93 minutes.

We watched as nudity abounded on our screen. Yeah, like that isn’t awkward when you’re 15 and one of your closest friends of the opposite sex is sitting next to you on your left while your mother is sitting on your right. BUT, it got better…

Justin and I stared mortified at the television, watching as the camera went from filming the three lying in bed together contemplating what to do, to panning above them so as to fully encapsulate the forthcoming shenanigans for the viewer to see.

Anxiety mixed with guilt mixed with shame overwhelmed me. Eyeing my brother, my mother and my close friend, I blurted, “We should fast forward!”

Justin responded quickly, jumping from the couch and heading straight for the VCR, ”Yeah. We should totally fast forward.”

Bless the inventors of the VCR. My friend and I were about to be saved from any further pubescent awkwardness and embarrassment.

Justin hit fast forward and fast forward it did – with a pretty crystal clear shot of what we were fast forwarding through. So instead of uncomfortably watching the three roommates becoming intimately acquainted at a slow drawn out pace, we got to watch Stephen Baldwin, Josh Charles and Lara Flynn Boyle go at it with one another like coked up rabbits who couldn’t get enough. So, yeah. There was that. Like I said, it got better. *cough

If there was an instant rewind in life, that would have been a moment to use it.  I don’t embarrass easily, but that movie in front of my mother, my brother and my friend had me wanting to crawl under the covers and die. I think it was worse for Justin. Poor Justin Bennett … wherever you are, I am so sorry for our poor life choice on that sunny summer day in 1995. 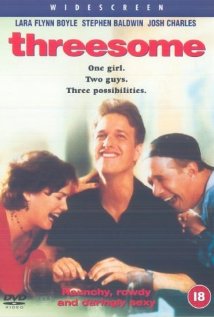