With a milestone anniversary just around the bend, I thought I would dedicate these next few throw-backs to the year I was wed and all of the planning and prep (or lack thereof) that came along with it.

I’m starting with The Proposal.

Today is ten years to the day that Clifford proposed. We were married approximately 31 days later on October 1st in 2005. Sounds like a quick engagement, right? Let me backtrack just a bit. Ten years ago today was the day Clifford officially proposed (because he had to). The notion of marrying me and throwing it out there as the world’s most grand and romantic gesture a gal can receive actually happened in January of that year.

Clifford was visiting me in Savannah just after the New Year. He’d finished his Masters and had found a job up in the Atlanta area, near where his family lived. Clearly, I was still living and working four hours away. Being the sappy son of gun that he is *cough*, I remember the moment as plain as yesterday – although I shouldn’t use that phrase. I can hardly remember what I had for lunch let alone what happened yesterday. But I digress …

I was sitting in my apartment on 49th Street. I was working on something on the couch with the TV on in the background. Cliff was wandering around and casually passed behind me saying, “I guess you can go ahead and plan a wedding if you want.”

Totally taken aback and not really believing what I was hearing, because this was the guy that was NEVER getting married, I looked up at him and laughed.

He looked confused, “What?”

He said, ”Just go ahead and plan it … or whatever.”

Me:  “Are you being serious right now?”

It took me a moment to process what was happening. We had discussed how we wouldn’t do an engagement ring if this ever happened with us so we could save money (though we did browse a store once a couple years before with me talking about my likes and dislikes while Clifford aimlessly stared at the ceiling with a pained and somewhat constipated look upon his face), so the fact he was quasi-proposing without a ring wasn’t what was confusing me. It was the fact he was quasi-proposing at all.

I looked up at him from the couch and said, “Ok.”

He said, “Ok. So when were you thinking?”

Me, “I don’t know. I love fall. How about October? Does that work?”

Cliff, “Sure. Whatever. Just make it happen and I’ll be there.”

So I was engaged! Kinda …

I ended up picking October 1st. So, less than 10 months to plan a wedding. It could be done. Especially after I realized that I wasn’t as into the party planning as I thought I would be. I’ll focus on all of that in other posts, but just know for today’s throw-back that the next several months were spent organizing the wedding here and there.

It was July and he had just told his parents. Why he waited almost six months to share the joyous news with them, I have no idea, regardless, things were coming together. We’d secured the venue, a preacher, yadda yadda yadda, and that’s when I realized I’d never been asked. Clifford never actually asked me to marry him. In the words of some SNL skit – What’s up with that?

I pointed this out to my supposed fiancé. He shrugged. Don’t shrug at me. I told him he needed to actually ask me to marry him. I told him that if he didn’t ask me by August 31st, I was going to call the whole thing off and I didn’t care. He and I would both cut off our noses to spite our faces. We are those people. We are argumentative. We are button pushers. We are the killer of dreams. And we do this to constantly one-up each other in an unspoken yet understood war of Winning At Everything that has been raging between us for years.  That’s how we roll. That’s also why we are stuck with each other – no one else would put up with that shit.

So, weeks went by. Never a word from this man. I had finally moved from Savannah to Atlanta. I was bunking with my sister-in-law before the wedding while Clifford was rooming with some old friends from high school. Before I knew it, August 31st had arrived. Clifford calls.

Clifford: So…want to maybe go get dinner tonight or something?

Me (knowing full well it was the 31st): Okaaaay. What did you have in mind?

Clifford: I was thinking maybe Aspens (a fancy shmancy restaurant patroned by people like us only for special occasions or, you know, never)

Me: That sounds good. I’ve never been.

So we went to Aspens. It was lovely. Of course I knew what he was up to the entire time. Leave it to Clifford  to leave things till the very last minute because I’m telling you, that deadline was firm. I was as serious as a heart attack when I tossed him that closing date.

We’d made it through almost the entire dinner and he still hadn’t asked me to marry him. You have got to be kidding me. Then he started looking around like people were watching us and without making any eye contact whatsoever, he grabbed my hands in his beneath the table. Finally he looked at me and said he had something to ask me. Here it was. I WAS ABOUT TO GET MY PROPOSAL!!!

His hands kept fidgeting and he had the biggest grin I think I’ve ever seen him wear as he slowly shoved something in my hand and said, “So …I was thinking … maybe … would you want to marry me?”

And though I totally saw this coming all day, I couldn’t help but laugh and smile and say yes. Typical Clifford. Then he shoved my hands away as he said, “Ok. So I did it. Happy now?” Also typical Clifford.

Then he asked, ”Aren’t you going to look at your hands?”

I had actually forgotten he’d put something in them because there was this totally sweet, completely sincere moment being had that like never happens between us. I looked down and it was a box. I opened it and inside was the most beautiful engagement ring I could have possibly asked for. He. Nailed. It. Everything I’d said and pointed to in that jewelry store like two years before, had been heard. It was exactly what I wanted. I knew he had to have sacrificed big time to get it. I teared up. This I did not see coming.  Love that man. 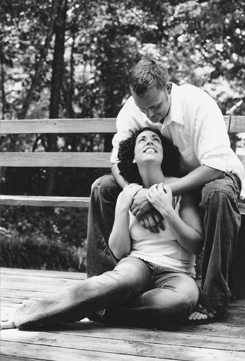 Our engagement photos … I know what you’re thinking – they are so happy and beautiful. Oh, young love … blah blah blah 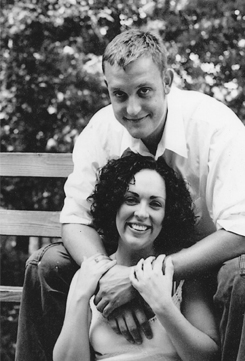 The truth is, we were totally pissed at each other that day. We’d been yelling at one another so loudly they had to have heard us in China, and we continued to do so right up until Jelena (my college buddy, dubs partner and photographer extraordinaire) showed up to take the shots. Fake it till you make it, right? I laugh so hard every time I look at these because clearly pictures can be deceiving.

This entry was posted on Tuesday, September 1st, 2015 at 12:34 am and tagged with engagement, engagement rings, love, marriage, no take backs, proposal, romantic, throwback, wedding and posted in No-Take-Backs. You can follow any responses to this entry through the RSS 2.0 feed.
« My Foray Into Fantasy Football
The Music Challenge #13: A Love Story »