The Elkhart County Fair in Goshen, Indiana … oh how I miss thee! This week is fair week, and yes, this is a fair you actually attend pretty much every day if you can. Elkhart County’s 4-H Fair is one of the top 100 fairs in the world. It actually has the most acreage, though it’s not all in use. And it was essentially in my backyard. 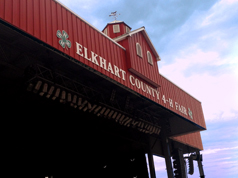 Yeah, I did 4-H. I got the ten year member pin. I usually entered the Drawing category, though I did enter my guinea pig Martha in my first year. I wasn’t very big on the club’s meetings and activities as I got older, nor very keen on selling geraniums, but I’m still proud to have been a part of the organization. I mean, it scored us a parking pass and free admission to one of the coolest events a Podunk town could have.  Oh, and it taught great values and all that jazz, too.

“I Pledge my Head to clearer thinking, my Heart to greater loyalty, my Hands to larger service, and my Health to better living, for my club, my community, my country, and my world.”

The fair has it all. It has the crazy Midway with creepy carneys, dangerous rides, and rigged games. It has that food aisle that smells like fried everything. It has farm animals, dairy barns, harness racing, demolition derbies, exhibit halls, elephant ears, tractor pulls, queen contests, rodeos, concerts and a parade.

As a kid, it’s the place that felt like Disneyland. Cotton candy on a stick, clowns, prizes, kiddie rides and a fun house. As a teen, it’s where you went to hook-up, smoke your cigarettes and flaunt your short shorts.

One summer a friend had invited me to the teen dance night. I thought it was going to be awesome. An actual event for individuals our age, dancing to good music and meeting new people. Instead, it was where I learned grinding was a dance move. I learned how much skin one can show and not get arrested. I also learned how to simulate sex on a dance floor in front of hundreds of other teens. It was probably one of the most disgusting and offensive things I’d ever attended, and that includes a county fair in North Florida. Felt like I needed a shower after both occasions and something to gouge out my eyes to make the icky visuals go away.

Another great memory was eating at the Taco Stand. It was my favorite eatery on the food strip. Immediately following suit, I got in line for the Crazy Dance, one of the newer rides at the time. You sit in a two seater while you’re jerked around from side to side, banging your head against the compartment all while spinning in circles at rather unsafe speeds. That day I’d gotten heat stroke and puked as soon as I exited the ride. But you bet I was back on that horse the very next year. Inappropriate dancing, unsound rusty rides, and puking up tacos are what make the fair so fantastic. You only live once.

One of the coolest things about having such a huge county fair, is that it brought in some pretty big musical talent for its attendees. Some of my favorites were Ray Stevens, CCR, and The Village People … there were probably even bigger country names, but I could care less about those. I think the biggest and best I’d ever attended was actually two summers ago. I hadn’t been to the fair in over ten years. I was home on a brief vacation and my dad got Chelle and I tickets to see Styx. It was unfreakingbelievable. Check it out here and here. 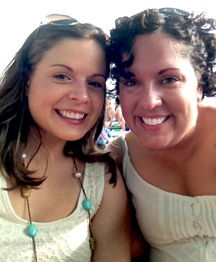 Chelle and me ready for Styx. 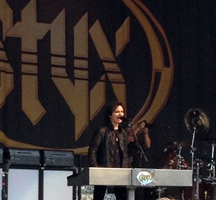 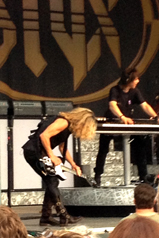 Somehow, no matter how sun burned, dehydrated, sore, tired, and painful the fair is, it’s forgotten the moment they close those admission gates and you can’t wait till the next year. If you have never been to a fair, I suggest you make the trek.

What’s your best fair story? Email me or submit it below.

This entry was posted on Monday, July 21st, 2014 at 3:46 pm and tagged with 4-H, concert, Elkhart County Fair, Goshen, Indiana, no take backs, Styx and posted in No-Take-Backs. You can follow any responses to this entry through the RSS 2.0 feed.
« Total-Take-Backs: Cockroaches
Thursday-Thank-Yous: July 24th, 2014 »

One Response to “Throw-Back-Monday: Styx At The Elkhart County Fair”