In hindsight, I was destined to marry a foreigner. Some people are born to marry a NASCAR fan, or a banker, or insert whatever “type” you have here ___________.

I’ve always been fascinated by cultures outside of my own. Toss in a pair of puppy dog eyes and a sexy accent – I’m sold. No offense to my hot red-blooded American men, though I adore you, the spark was never going to be the same. We would have been like a one dimensional 4th of July fountain fizzling out far too quickly whereas me and a man from a foreign land would be like those crazy aerial cakes shooting for the stars in multi-colored glory leaving lingering picturesque impressions in the skies.

I owe my destiny (and type) to that of pen pal writing. Remember when there was such a thing as letters? 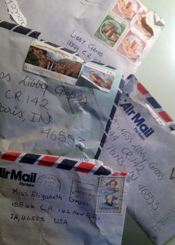 Letters. The life blood of communication before the Internet.

No emails, snap chats, tweets, posts or text messages. People communicated through tried and true letter writing. Penmanship mattered. It was actually a thing. Genuine thought was placed within the confines of a page. Someone from somewhere in the world, whether it was across town or across the pond, sat and took the time to pour their views and feelings onto a piece of paper for your eyes only. It was an intimate gesture that bound you closely to whomever it was that wrote those words just for you. Yes. Letters. I miss them.

My first foray into pen palling was around 3rd or 4th grade. My dad had a business partner in Italy with a daughter my age. After one of my father’s visits there, Manuela and I exchanged a couple of letters. We didn’t really continue beyond one or two notes, though I do remember trading a bracelet or necklace through our short-lived exchange.

This personal introduction to someone literally an ocean away had me hooked. I desperately wanted to know more people and places in the world. Those couple of letters between Manuela and me were the beginning of a lifelong pull towards those who hailed from anywhere beyond the USA.

Now don’t get me wrong – I’m a HUGE patriot and happy to connect with my fellow Americans. In fact, Clifford’s and my first argument resulted in me yelling at him to take the next boat back because I was tired of him comparing the US to Europe. BUT, patriotism doesn’t necessarily define my type nor quench my global thirst.

Back to international intrigue.

In 7th grade we had to take German for six weeks with Herr Miller (I loved Herr Miller!). I fell in love with the language and culture and had dreams of being an exchange student myself one day (kinda turned out cool that my father-in-law is Austrian actually). There was this organization Herr Miller used, almost like something out of the back of a magazine wherein you paid a few bucks for a student’s name anywhere in the world. You filled out a little form requesting from which country you wanted your new writing companion to be and whether you wanted a male or female friend. I never heard from the German girl I requested, but I did get responses from the two Australians.

I was fascinated by Australia back in the day as well. I wanted to live there. I blame Crocodile Dundee and the cuteness of baby koala bears for such fanciful thoughts. I traded pictures with my blonde Aussie pen pals and some small knick knacks to boot. 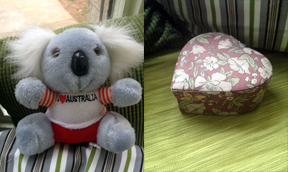 Nate sent a jewelry box and a stuffed koala bear.

One pal was named Nate and the other Sharon. We had a couple of great letter writing successes between us for being minors and across the world from one another, but like most long distance relationships in 7th grade, our connection was not meant to be of the infinite kind. With today’s technology, I should actually see if I could track them down. Hmm…maybe.

Before I knew it, those younger letter writing days had culminated in a permanent tug towards anyone with an accent who hadn’t seen Hoosiers and had a cornfield-less backyard. If I was at a party, my ears perked at words that sounded as if they had just been spoken by a character from the latest British spy film. I had unknowingly been building my “type.”

Freshman year my first date to a high school dance was with a senior foreign exchange student from Sweden. That’s just fun to say (sigh)… His name was Mattias. 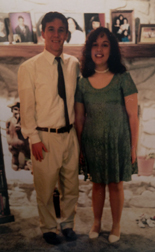 Me and Mattias. Oh, and my hideous tennis tan lines. I do not miss farmer’s tans at all. Or 90′s fashion.

We never wrote letters, but again, there was that fervent pull to someone from somewhere else in the world with a slew of different experiences to my own. 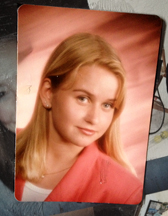 She had a killer forehand (we were both tennis players) and we hung out all of the time. I remember walking with her through her neighborhood as she smoked cigarettes like they were going out of style while she shared stories about her homeland. I remember thinking- This is SO European! It made me want to order a French café and don a beret (yeah, I know she was from Finland). I wish we would have stayed in touch when she went home. Probably my fault we didn’t.

My next actual pen pal became my boyfriend. I remember the words “I’m a 22 year old guy from South Africa” popping off the page. 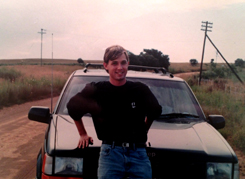 I’d graduated from magazine advertisements to the World Wide Web in search of expanding my horizons via one-to-one letter writing campaigns. Shaun and I exchanged emails daily but we wrote letters as well, and not just a one page little ditty to send off to one another, but three to ten page dissertations about our likes and dislikes, hopes and dreams. 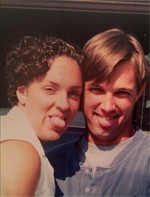 Shaun and me being total hams.

Those types of things can bond you more closely or more quickly than seeing a person every day. Sometimes we can say on paper what we can’t say out loud.

“Words are but air; the pen leaves a mark.” – Unknown

My doubles partner in college was one of the coolest women I’ve ever met. Jelena was from Croatia and she was awesome.

The best doubles partner ever and a truly beautiful friend.

We were a great team. Her accent was incredible. I loved the way she said my name. I could listen to her talk about anything. She could make the dictionary sound interesting with her pronunciations. And she had this vibe that was so relaxed and independent and wise. And she was blunt. She put it out there openly and honestly. I craved listening to her experiences growing up overseas. She had the biggest heart, too. I am a lucky girl to have had her as a partner and friend.

Lucia and I became friends when I lived in Italy. 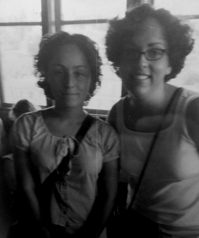 Lucia and me. We had the same hair.

We became close friends that summer. We travelled to the beach, to Rome, to Siena, to Florence, to Cortona and to all sorts of little villages here and there along the way. We rode our bikes everywhere. We walked around town late at night discussing movies and boys and whatever else young twenty-somethings talk about. She was obsessed with Tim Burton and Johnny Depp and I was, too. She taught me Italian, I helped her with her English. We even crashed the most beautiful Italian wedding I’d ever seen. She was my Italian partner in crime. 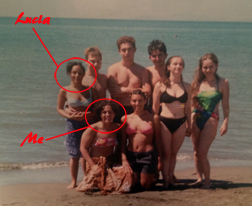 Lucia and me and some friends at Principina Beach.

Then there’s Clifford. My husband. A dual citizen of Austria and South Africa, though born and bred in the latter part of the world. We met the second day of college orientation and became fast friends. We eventually ended up walking down the aisle and saying our I Do’s. He said it with the biggest puppy dog eyes and a sexy accent. Like I said, it was destiny. 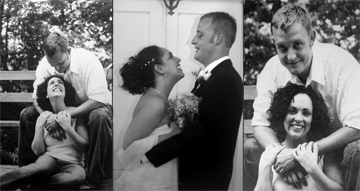 I’ve learned so much more about the world and the people in it by putting myself out there and exchanging moments, through a letter or an actual conversation, with those who have lived elsewhere in the world. Having pen pals and befriending exchange students changed my life and my approach to it.

People sometimes mock the Facebook or Twitter or whatever social media “friends” one has but has never met. I say that that’s today’s way of pen palling. We have more access to each other than ever before. We don’t need to wait ten days on the postman making a delivery from overseas or fill out an ad from the back of a magazine. We can connect instantly to pretty much anyone anywhere. And we should. Think of how much closer the world can actually be if we connected with it. Think of the kinds of conversations we could have if we participated in them. Think about the impact we could make because of how we are being impacted.

Heavy thoughts for a Monday. Go. Be enlightened. Change the world. And send an actual letter if you can.

This entry was posted on Monday, March 9th, 2015 at 11:00 pm and tagged with foreigners, friends, mail, no take backs, pen pals, writing letters and posted in No-Take-Backs. You can follow any responses to this entry through the RSS 2.0 feed.
« A Taxidermy Adventure (guest post)
Freaky Friday (part one) »

One Response to “Throw-Back-Monday: Pen Pals”