Remember those primary school musical extravaganzas? There was usually one in the winter and one in the spring… You would attend music class maybe once or twice a week throughout the year. You supposedly learned to sing. Your class partnered with other classes to pull off a 90 minute concert wherein you awkwardly demonstrated your music prowess, or lack thereof, for an array of family and friends sitting obligatorily (and rather uncomfortably) in the bleachers of the school gym. Yeah, I wasn’t really a fan of those events, either.

As I am completely tone deaf (ask anyone who has ever heard my karaoke renditions or sat next to me at church), let’s just say music class was not necessarily where I shined, so again, not my favorite elementary school events.

Our music teacher, Mrs. Leer, would usually have a predetermined theme for each performance. One year we did Disney. My grade shared the musical stylings of the Little Mermaid with our parents, grandparents, aunts, uncles and siblings (the unfortunate folks forced to bear witness to young children’s ungainly on-stage ticks and off-key screeches). One year we did Broadway show tunes. To this day, I still can’t get the A Comedy Tonight, Mame and Shall We Dance mashup out of my mind…

These were celebratory performances marking the milestones we were hitting in our developmental years. Maybe the lesson was harmonizing. Maybe it was being able to read music. Maybe it was just understanding the weird hand motions Mrs. Leer made while mouthing the words to the songs. Whatever the lesson, our little musical display was designed to showcase the culmination of months of fortitude etched in hard work and determination….. hahahahahahaha.

Once in a great while, there would be the chance for a few children to step forward from the rest and offer their talents singly to the crowd. That could be anything from a teeny tiny solo line in the middle of a song, or it could be reading a poem or a quote into the microphone.

I was one of those children. I was Fred’s wife.

5th grade. Winter school pageant. A Christmas Carol. I got cast as Fred’s wife. I had two lines and it was going to be amazing. I even had an understudy. This pageant was going to be my moment in a world of troubling tempos and unreachable registers.

I know nothing about acting. I’d never been drawn to the field, to be perfectly frank. But whether it was my competitive spirit or boisterous personality desperately seeking attention, I was so psyched to be cast in our little musical play.

My husband, Fred, would be portrayed by a 6th grader. That was pretty cool, too, – an older man. I had a costume. I had a microphone. My non-stage stage dreams were coming true and I was so excited! I was going to nail my part so help me. I was going to be the best Fred’s Wife there ever was!

The night of the show, the play began to unfold with various Christmas melodies performed by students in grades 4-6. My 15 minutes was fast approaching. My set location (on the school gym floor) was under the Christmas tree. 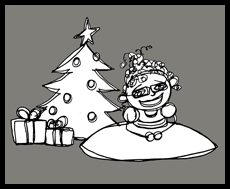 Ready for my close up.

I think a couple of first graders were asked to play our children (did Fred and his wife even have children?) – I can’t quite recall. I was supposed to be mending something or playing with my kids, again, I’m a little vague on the action sequence of it all. Then Fred entered our “house”. He said whatever it was he was supposed to say. My heart was beating faster by the second. What was my line? What was I supposed to say? It’s coming … don’t mess up! Be loud. Be clear. Enunciate … what??!! That’s what Mrs. Leer had said but I was like 10. What the hell did enunciate mean?

Fred was looking at me. It must be my turn!! I felt the audience’s eyes upon me; Mrs. Leer and the entire 4th grade standing on the risers were staring at me expectantly. Fake smile in place (after all, I was acting), I spoke into my microphone with as much Christmas cheer as an actress of my caliber could muster.

There it was. Nailed it.

The 4th grade broke out into their loud and discordant version of Deck the Halls while I smiled on with my fake husband Fred by my side. 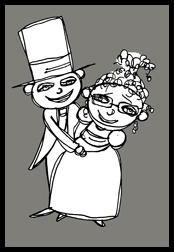 I can’t say the moment really birthed any sort of an acting bug within, though I did, and still do, continue to pull out the old drama card when the situation calls for it…

And for those of you stuck in the bleachers at those God-awful events this season and beyond, just know there is some kid at that concert whose night you’ve made by being there. It is not for naught.

This entry was posted on Monday, December 15th, 2014 at 4:37 pm and tagged with A Christmas Carol, Christmas pageant, music concert, no take backs, performance, primary school and posted in No-Take-Backs. You can follow any responses to this entry through the RSS 2.0 feed.
« An Ode To The Best Friend
A Merry Little Christmas (circa 2005) »