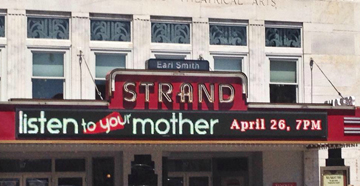 This entry was posted on Wednesday, April 23rd, 2014 at 5:24 am and tagged with Atlanta, Listen To Your Mother, LYTM, no take backs, performance, rehearsal, warm and fuzzy and posted in No-Take-Backs. You can follow any responses to this entry through the RSS 2.0 feed.
« Guest Post: Tastes Like Chicken
Total-Take-Back: Gone With The Wind »