It was my first trip to Atlanta with Clifford. His folks were throwing a party. I don’t recall the occasion. For them it could have been to celebrate a momentous life event or to simply celebrate the friendships they’d cultivated in their years since immigrating to the states. See, when I first met Clifford, his family had only been here for four years. They had no immediate family when they first arrived stateside, so the friendships they built were important to them.  There was one group in particular, however, that went beyond the box of “beloved friends”. Family isn’t always blood, and that’s what they were. They were family.

So when people started arriving and being introduced to Clifford’s female friend, I had already heard a lot about them. The Orffs – they were a package deal so it seemed. Three boys, the folks, Uncle Bob and Aunt Lee. They were  New Yorkers that had somehow found their way down South. I didn’t have to understand it, but as I longed for Northern conversations, I quickly accepted it (says the Hoosier umpteen years later still living well below the Mason-Dixon line). They were loud. They were funny. And they knew how to drink. I liked them immediately. 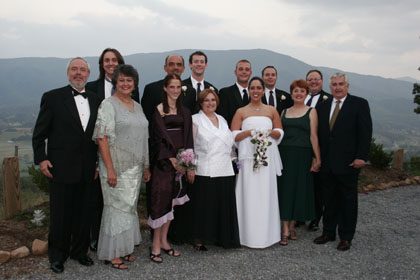 This is them (and Scott).

There was one standout among them, though. She had me at “Darlin”. Aunt Lee became my favorite person on the planet that day. Though married, she was an independent woman. She owned her own business when she didn’t need to work. She was smart, gorgeous, and so full of love – for everyone. It radiated off her in a way I can’t describe, but the moment she walked into a room, the energy changed. There was light. It was a bright light. Her smile was so sincere and her laugh was so contagious. She had everyone’s attention and we were all wrapped around her finger, yet she had no idea. That’s what made her so special. 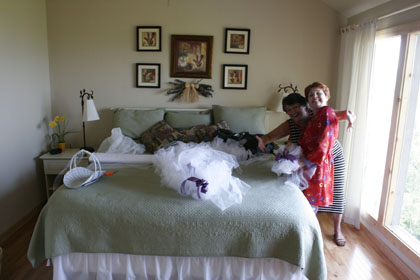 Through the years she would offer me words of wisdom about sisters, spouses and stuff. She had a faith in Clifford and I that warmed my heart. She took me to pick out our wedding bands. She welcomed us to our new home. She suffered losses but became all the stronger for them. She was a selfless and steady rock for others over and over and over again. She never met a stranger and she loved with her whole heart.  Aunt Lee was the type of person everyone should strive to be. I can only hope to one day have an ounce of the compassion and the love this woman expressed and exuded on a daily basis.

This entry was posted on Friday, May 6th, 2016 at 1:58 pm and tagged with aunts, death, family, immigrants, love, no take backs, sieze the day, sisters and posted in No-Take-Backs. You can follow any responses to this entry through the RSS 2.0 feed.
« A Conversation With Clifford II
Lib Goes To The Library – Part 2 »