I have driven from Georgia to northern Indiana about 152 million times. Like most of you driving from point A to B, I try to find the most efficient route, the shortest distance and the highest highway speeds. I have a purpose and it is scheduled. I’ve done the drive so many times that I actually compete with myself by trying to beat my best time. This means I make quicker and fewer stops and that I steadily increase my cruise control as I get behind that guy going 90 feeling confident he’ll get nailed by the cop behind the billboard before I do.

I no longer look at the horses in their pastures. I no longer appreciate the bluegrass in Kentucky or the mountains in Tennessee. I drive by the Corvette Museum, which is one of the coolest architectural structures around, and I just check it off as, yep, I’ve hit Bowling Green. I count mile markers and exit signs while I get annoyed with the slowest driver EVER in the LEFT LANE (I know you all feel me on that one).

Returning from my last trip home I decided I was going to change things up a bit. I had recently decided I want to become a whiskey connoisseur (I’ll post about that later). 95% of the world’s bourbon is produced in Kentucky. I drive right by the Bourbon Trail every time I do this trip. Of course I drive by a million other places and things I never see because I don’t take the time to stop and check them out. We all do this. Why? What’s so wrong about getting in an hour or two later than you had previously planned? Why does everything have to be so rushed and scheduled?

Spontaneity kicked in and I was getting off the highway. I made an executive decision. I was going to see the Maker’s Mark distillery.  There’s a sign saying that Jim Beam and Maker’s Mark are sitting right off of I-65. Seriously. And I’d never toured a distillery before. Here I come.

I could practically spit on Jim Beam from the exit road. Maker’s Mark couldn’t be too far down the street. Oh look! It’s the Rosewood distillery. I kept on trucking. The road started winding. It was beautiful. I was seeing parts of Kentucky I had never seen. Suddenly I was noticing the bluegrass again, and the horses and the time it was taking me to get to the distillery… Where is this place again? I thought it was just off the highway. I’m thirty minutes in; I’d better check my GPS. GPS says thirty more minutes?!!!! Where is this place? In France? Now things are getting sketchy. That horse just looked at me weird. Did that sign just say “turn back now if you value your life?!!”.

I came to an impasse and SIRI was telling me to go straight but it looked like the skinniest driveway I’d ever seen. Is this what Kentucky calls a road? One car, I’m telling you ONE car TOPS, could be on this thing at a time. Did Maker’s Mark actually want visitors? The last tour was in thirty minutes. I was never going to make it and I was suddenly stuck in the backwoods of Kentucky that had become much more sketchy than pretty, but I was on a mission. I hauled it to that distillery. I wasn’t going to fail. Suddenly, the woods cleared, the road widened and there it was in all its wondrous glory. The Maker’s Mark Distillery.

I had five minutes. I followed the signs, saw the cars and pulled into the drive. One minute till the last tour of the day. I ran inside the house, making a great Kramer entrance, and there were fifteen to twenty people sitting in a meeting all staring my way. I ignored them at first, just looking around the house, probably going into rooms I shouldn’t have as I was searching for my would- be tour group. Finally as I was left with nothing to do but stand and stare at the people staring back at me, a nice gentleman got up and asked if he could help me.

Slow on the uptake, that’s when I realized, I might be in the wrong place. I said to everyone, with a smile of course, “so this isn’t the distillery tour starting point, I take it?” They all laughed at me. The nice gentleman walked me out explaining they were having a board meeting and that I had to go down the hill. He assured me if he had a dollar for every time someone made the same mistake … he’d have a dollar.

I thanked him repeatedly and hopped in my car, praying there was a delay. I got out, went to the right tour spot, but it was locked. I’d missed the boat. Are you KIDDING ME?!!! Well, I wasn’t going through all this for nothing, and no regrets, right? So I headed to the souvenir shop to buy myself a shot glass. 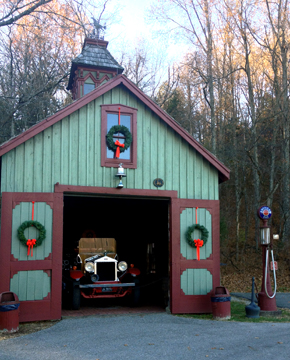 Near the tour entrance and souvenir shop.

Praise be to the wonderful lady selling Maker’s Mark’s commercial goods. She made the mistake of asking how I was doing and I explained my sorrow in missing the Maker’s Mark tour. 152 million times I drive past this place and the one time I stop… hold that thought. The lady was on the phone. It was done. I may have missed the tour, but she got me into the tasting (and we all know that’s what I really wanted, especially after the hour and a half I’d just spent trying to find the place and you know, humiliating myself in front of their board). And the tasting was on the house. Like I said, wonderful lady.

I thanked her profusely as she led me through the back secret way (which was super cool) to the tasting room. Just in time. It was fantastic and I learned a lot. Roy (I think? Maybe Ray? Or maybe Frank??) was so kind and so great at explaining the differences between their products. Loved every minute of it. Sadly, we were done, but then EXTRA SUPER COOL Roy?  offered to take me on a private tour because I came all this way, and again, on the house… UH-MAZING. 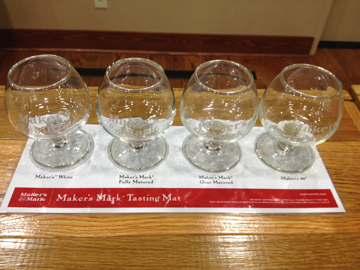 The tasting. Thank you Maker’s Mark! It was a beautiful thing.

MAD MAD MAD respect for the people at Maker’s Mark. They went above and beyond reminding me there really are such good people in this world. And by taking the road less traveled (let’s be honest – it looked like it was NEVER traveled) I scored an experience I would never take back. Next time you’re on a road trip, or maybe it’s on the way to work, I challenge you to make one extra stop. Try something new because life is too short. Do things a little differently and start your year off right.

This entry was posted on Friday, January 3rd, 2014 at 7:55 pm and tagged with bourbon, distillery tour, Kentucky, Maker's Mark Distillery, no take backs, whiskey and posted in Awesome Flash-Backs, No-Take-Backs. You can follow any responses to this entry through the RSS 2.0 feed.
« Total-Take-Back: Happy New Year! (but not really)
Throw-Back-Monday: Snow Days »

3 Responses to “A Road Less Traveled: The Maker’s Mark Distillery!”