Four years ago Clifford and I hauled up to good old Indiana for Chelle’s and my best friend’s wedding. “Best friend” is an understatement … Darewood is my brother from another mother. In our awkward years (his were MASSIVELY awkward, by the way) we were like two peas in a pod (except I had the better hair). We were thick as thieves. He was the Thelma to my Louise. 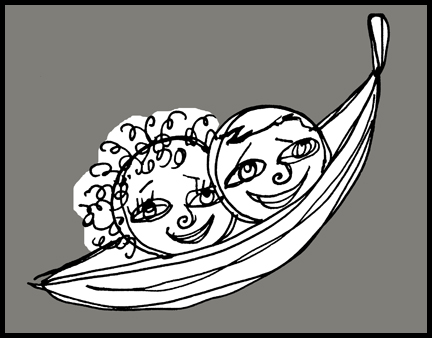 So there I was on my way to THE event I never thought would happen. I firmly believed Darewood was bound to eternal bachelorhood, namely because I couldn’t fathom anyone ever having enough compassion to say yes to such a misunderstood dweeb (I say that with love). Enter Tracy. The kindest, warm-hearted, take-pity-on-the-poor-man woman I know. She deserves a medal. No, really, she does.

Back to the wedding. In the middle of the ceremony Clifford gets sick. Really sick. Find-a-trash-can-outside-the-sanctuary-ASAP-sick. He was officially out for the count. The entire reception was spent periodically checking in with what had become his favorite bathroom stall about every fifteen minutes while Chelle, her hubby, and I drank and danced the night away. 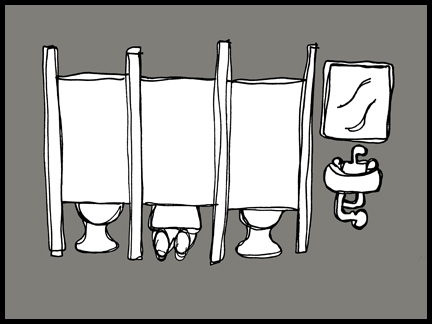 Clifford’s hangout for the duration of the reception. A real trooper. 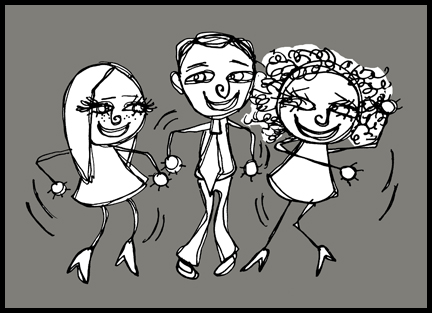 Chelle, her hubs and me boogieing on the dance floor while Clifford was retching in the bathroom.

Highlight of pretty much the most unexpected affair I’d ever attended? While heading to the bar at the reception, Chelle and I ran into our old high school principal and vice principal! Darewood was always a bit of a suck-up, so I wasn’t surprised they were there. After reminiscing a bit, we celebrated our reunion with a shot. It was AMAZING! How many people can say they’ve had a drink with their former high school administrators? We were particularly fond of our old VP, so to have a shot with him was like a piece of our bucket lists had been fulfilled. 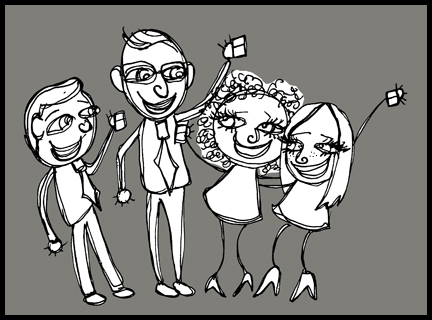 Chelle and me taking a shot with the retired Veep and Big Cheese.

What insight was gleaned? Never take for granted the possibility that your odd duck bosom buddy has a chance at happiness (I mean if it could happen to Darewood, it could happen to anyone) and never take-back an opportunity to share a drink with retired authoritarians. You simply won’t regret it. I promise.

This entry was posted on Monday, December 23rd, 2013 at 5:56 am and tagged with no take backs, reception, vice principal, wedding and posted in No-Take-Backs. You can follow any responses to this entry through the RSS 2.0 feed.
« Total-Take-Back: Running Through A Screen Door
Total-Take-Back: Orange Is NOT The New Black »